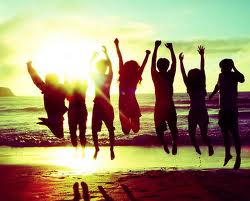 KRISHNA AND SUDAMAA a perfect example of friendship .I was amazed to see the two bodies dwelling into the one soul while watching “JAY SHRII KRISHNA’’ on a DD NATIONAL during the  course of my childhood days.
When I was a child I couldn’t realise the term spirituality ! I was unaware about SAINTS,GODS etc etc.
During the ganpapti festival  I could feel a joy and sense of happiness all over my spine because we used to celebrate it at my grandmother’s old anchestrial home with a divine faith on a lord ganpati. One day while singing the aarti I noticed that there are 33 crore gods in an indian culture.
To Ask something on before god that I wanted,praying for  increment my pocket money were the stuffs  that came under the ambit of spirituality at my childhood but when  I started seeing episodes of mahabharata and jay shrri krishna I could see the influence of god in form of lord rama,lord krishna over the devils then  concept of spirituality has became wider for the neurons of my mind.
Bu one thing  towards I attracted the most was friendship of krishna and sudama .
What is friendship..??
>ability to go to each other for emotional support.
>mutual understanding and compassion.
>Honesty,even in situations where it may be difficult for others to speak the truth.
>the notion of a righteous person who can appropriately delineate between that which is “good” and that which is “evil”.
So the defination of friendship varies person to person.
Trust.compassion.honesty,sacrifice were the qualities that I obeserved while watching krishna and sudama together.do we have that qualities..?? I find it difficult to observe such qualities when I give a glimpse towards the society. As we know “A MAN IS KNOWN BY COMPANY HE KEEPS”.its true.
It doesn’t matter how ugly you are.it doesn’t matter how poor you are ,it doesn’t matter how you dress as long as you have  quality type of friends to accept  as you are.who appreciate your beauty,your talent,you strong points and your weak points. This is the magic of friendship.if you are at right place at the right time then you are a lucky one otherwise life is a limited edition so,live it to the fullest.
Bollywood film stories are based on either LOVE or FRIENDSHIP.there are so many songs strucking into my mind right now which were picturised ; defining  only  pros (not cons) of friendship.
Some of them are-
1.       Yeh dosti ( sholay)
2.       Salaamat rahe dostana hamara ( yaarana)
3.       Kiska hai yeh tumko intejaar mai hu naa. ( mai hu naa)
4.       Yaaro dosti badi hi hasin hai ( album-indian idol )
5.       Hai junoon ( new york)
And the list goes on ( you can google it .it makes no sense to give a further list)
Anything can happen in a bollywood .jay and veeru a famous jodi  played eye-catching role in a super hit thriller SHOLAY. you have seen the onscreen chemistry between dharmendra and hema  &  and people still enjoy it whenever they have an encounter with sholay anytime on a TV !! after 31 years amitabh bachhan have ; had a romance with hema in “baagbhaan”…
If we see it in a comic way..did Jay cheat veeru…??
No : it happens only in bollywood stories  may be in real life but I havent seen it so can’t comment on it. figure of speech “hyperbole” usually seen in typical bollywood movies. Anything which is unintelligible becomes easy to understand while watching bollywood movies.
These are diversified concepts ,terms,contents, related to fraaandship.
There are many articles, editorials in newspapers have already published about friendship .its not a topic to be discussed it’s a part of our life

It was just an Another attempt to express my feelings.i would like to acknowledge and express my gratitude to every person who has come into my life and illuminated me through their presence…..
( abhijeet,aniket,madhujeet)