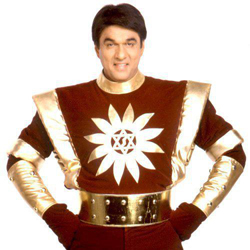 POWERRRRRRRRRRRRRRRRRRR………….
Guys guess the energised voice of Dr.jaycall.but who is dr.jaycall anyone knows him ??
Yes im sure everyone knows him..The villain in a famous TV show  “SHAKTIMAAN”.now your eyelashes begin to affirm that how your childhood has affected deeply with a presence of shaktimaan on a DD national.i still remember when I was in 5th standard  used to bunk school on a Saturday to see my superhero : “shaktimaan”. Me and my friends would gathered in my home sitting in front of tv and  our eyes would set on 15 inch  vediocon TV..neither the presence of my parents nor of any disturbance could have diverted us from watching our superhero . how DR.jaycall used to try his level  best to defeat  shaktimaan and how he would overcome his every action..as at that time I was in a school henceforth I dint know what newtons law stands for otherwise I would have known about the statement-“ to every action ( by tamaraj kilvish and jaycall) there is equal and opposite reaction( by shaktimaan)”
Moving on to next there was another villain “TAMARAAJ KILVISH” and dr.jaycall was one of his disciples.
Kilvish used to take advantage of dr.jaycall as he was a scientist.he used his all knowldege for making clone of shaktimaan, poisonous gases, devils ( robot that operates according to the instructions given by dr.jaycall)
they may be  called “FIDAAYIN” (  AL-QUAIDA’S terrorists )…:D
if shaktimaan could have crossed its 2500th episode and  run successfully uptill now at 2013…but as we know everything has a limit..Mukesh khanna finally gave up as his belly started giving answer  and he realised that no one wants to see an unfit shaktimaan so all the episodes were over and what left only the pleasant memories of the superhero..and a fairy tale.
Now introducing GITAAJI.. gangadhar ( another side of the coin) would call her DEVIJI..”how can a person call a women DEVIJI ? AND at the same time do flirt !!! its likE Watching rakhi sawant in a SAREE.
Gangadhar a humorous person having teeth anologues to rabbit. He Was eye catching although ; he was the first moron that I have seen on a national television.i would think that why shaktimaan can’t flirt with gitaaji..as he was superior in all aspect but after sometime I realised that gitaaji might have hated the person in a RED costum. ( hehehehehe) so that she would enjoy the company of jerk gangadhar.
I was behaving like shaktimaan at my childhood except the way he used to cover the distance from one place to another by rotating his body in 360 degree like “top” otherwise my soul could have rested in PEACE and my body could have rested in PIECE. I remember when my elder sister was getting married and I along with my parents had gone to the market to buy new clothes for wedding. I insisted my parents for buying “shaktimaan costum” for me but they didn’t.wearing shaktimaan ‘s costum on my sisters wedding might have a good idea for me but not for my family.i was behaving like a moron coz I was affected by the aura of shaktimaan.
If you carefully listen the title song of shaktimaan-you will notice these lines-
“ HOTA HAI JAB AADMI KO APNA GYAAN….KAHLAAYA WO SHAKTIMAAN”
The year after shaktimaan closed in 2005 and now its 2013.
I am 20 year old guy begun to realise WHAT I AM…!! SO am I a shaktimaan ? yess. I am a shaktimaan .infact you all are shaktimaan if you truly know yourself for what purpose you have came here on a earth ? what is your duty ? what is your karma ? not necessory to generate heat from the hands,lightning from the body as mukesh khanna would do coz it was a scripted tv show just a tv show like another. But as we are growing up we can sense out a logic behind the show.
Find yourself .chisel out the best within yourself
Any bad thing  that has been a part of our life and if we need to eradicate it with roots then we need
POWERRRRRRRRRRRRRRRRRRRRR…………..
THE ABILITY  to influence the behaviour of people with or without resistance J