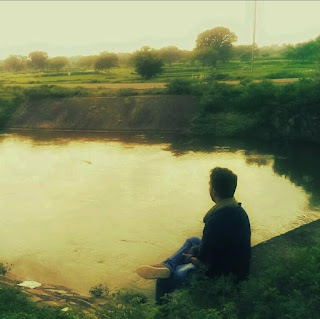 When trees shed leaves, the leaves don't take it personally. It is inevitable. When water vapours lose their identity and take the form of clouds, the droplets don't take it personally. Having experienced the perks of residing in the comfort zone of soil, a seed might have been an introverted kid who didn't want to come out of it and might have rejected the offer of nutrition to show up on the surface. But, what is inevitable, can't be avoided. The cycle goes on. Nature has a solution for everything. It has the ability to change the introverted side of the seed into an ambivert one so that "they" can have roots beneath the soil. Nature has reasons for everything, be it bidding adieu by the leaf to its beloved tree, losing an identity of its own and floating as a cloud, or converting an introverted seed into a giant ambiverted tree.
It's a part of the process which comes under the ambit of evolutionary biology which prevails over imagination of 'what if'.
But why do-
some people not have the exact reasons for abandoning someone who used to be their lifeline? Why do some people not deserve closure? Why is it so difficult for a person to move on without receiving an apology? Have we become too shallow to ignore the basic decency to bid adieu to an individual who once tried to cross an ocean for us even when he/she didn't know how to swim?
Nature may not have reasons to abandon a particular thing or creature.But, we humans must have the audacity to tell or ask someone about the reasons for avoidance, uncomfortable silence, and abandonment.
Evolutionary biology might not have reasons to justify itself, but evolutionary psychology should have them.
As Voltaire rightly said-" common sense is not so common.